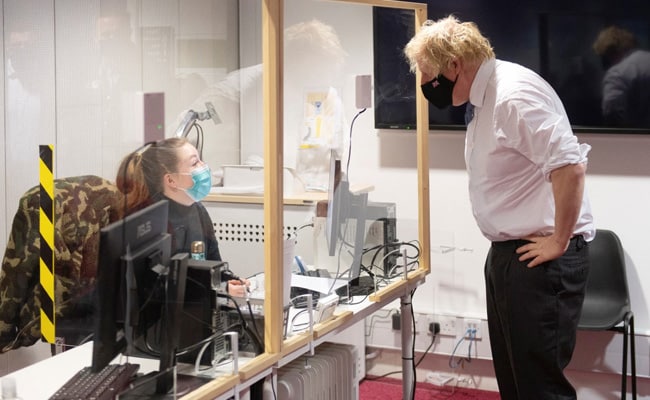 Those who have not been vaccinated are “eight times more likely to get into hospital”: Boris Johnson

Around 90 percent of coronavirus patients in intensive care units have not had a booster jab, British Prime Minister Boris Johnson said Wednesday, defending his decision not to tighten virus curbs in England.

Speaking at a vaccination centre, PM Johnson urged people to get “vital” booster jabs, saying “the overwhelming majority” of those currently going into intensive care in our hospitals have not had the booster jab.

“I’ve talked to doctors who say the numbers are running up to 90 percent of people in intensive care who are not boosted,” the prime minister added in Milton Keynes in central England.

Those who have not been vaccinated are “eight times more likely to get into hospital,” he warned.

The UK has been hit by a huge surge of the new Omicron variant, with England and Wales reporting record case numbers on Tuesday. The UK has been one of Europe’s worst hit with a deaths of 148,021.

So far more than 32.5 million people have had booster jabs in the UK, PM Johnson said.

He urged the 2.4 million people who had two jabs more than six months ago but no booster to come forward.

While Northern Ireland, Scotland and Wales have limited social contacts and closed nightclubs ahead of New Year’s Eve celebrations, PM Johnson justified his decision not to do so in England.

The high take-up of boosters in England “is allowing us to go ahead with New Year in the cautious way that we are,” he said.

The government held back on further curbs because “we can see the data about the relative mildness of Omicron,” PM Johnson said.

He also stressed the “very, very clear effect of getting those jabs, of boosters in particular,” saying “that’s what’s making a huge difference”.

PM Johnson had set a target of offering a booster jab to all adults by the end of the year. “What we need to do now is really finish off that work,” he said Wednesday.