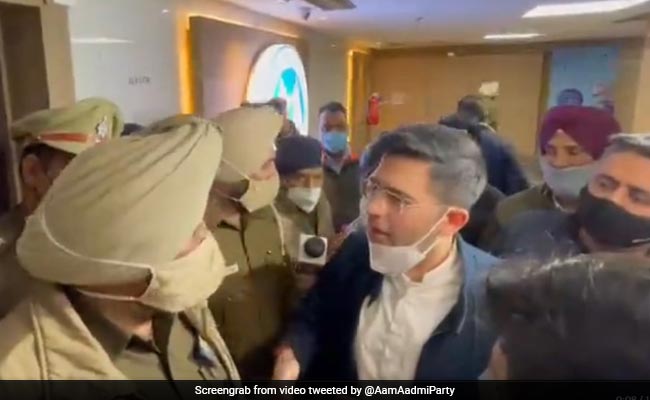 The Aam Aadmi Party has claimed the “shocking death of democracy” after a BJP leader – Municipal Councillor Sarabjit Kaur – was declared the winner of the mayoral race in Chandigarh yesterday, beating out the AAP’s Anju Katyal by one vote.

Sarabjit Kaur and Anju Katyal both polled 14 of 28 polled votes but the former was declared the winner after one vote in favour Anju Katyal was ruled to be invalid.

AAP Senior Leaders are waiting outside his office but he now refuses to meet them. pic.twitter.com/aM3LAnmyUc

The AAP’s Punjab MLA, Jarnail Singh, also hit out at the attempt to ‘kill democracy’.

“Congress councillors directly joined BJP after BJP witnessed reduced number of seats. Even after that, BJP took help from the bureaucracy when the votes turned out to be low in number. It is an attempt of killing democracy by misrepresenting right votes,” he was quoted by news agency ANI.

Mr Singh claimed the mayoral poll results was evidence of “a clandestine understanding between the BJP and the Congress” to defeat the AAP.

Chandigarh civic polls, declared last week, threw up a hung house after the AAP produced a sterling performance to win 14 of 35 wards. The BJP won 12, the Congress eight and the Akali Dal one.

In the race to elect the mayor, of 36 available votes only 28 were polled because seven Congress councillors and the lone Akali representative abstained.

The BJP’s vote count increased by one after the Congress’ Harpreet Kaur Babla and her husband, the ex-Vice President of the party’s local unit, joined the BJP on January 2. The 14th vote was from Lok Sabha MP Kirron Kher, who is eligible to vote as an ex-officio member of the municipal corporation.

The AAP thought it too had 14 votes but, after one was declared invalid, the BJP candidate was declared the winner race. After this there was a ruckus, with AAP members reaching near the mayor’s chair and holding a protest. They also tried to stop the new Mayor from addressing the House.

The BJP also won the Senior Deputy Mayor and Deputy Mayor posts; the Congress and Akali abstained from voting in these polls as well.

The BJP’s Dalip Sharma won the Senior Deputy Mayor seat beating the AAP’s Prem Lata by 15 votes to 13. Mr Sharma even managed to secure one vote from an AAP councillor.

Anup Gupta was declared Deputy Mayor after a draw of lots because he and the AAP’s Ram Chander Yadav each had 14 votes.

With input from ANI