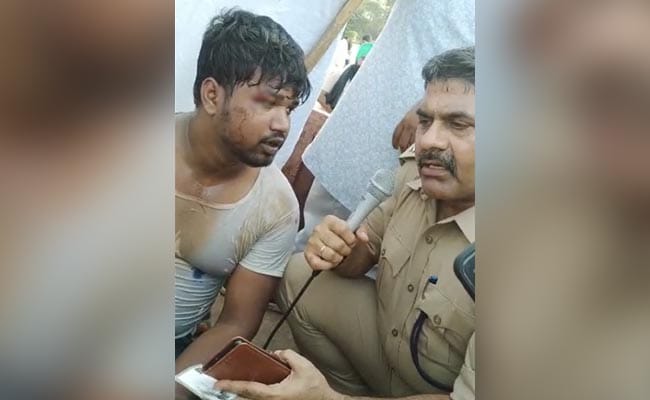 NDTV cannot independently verify the authenticity of the video

A fresh video from violence-hit Lakhimpur Kheri in Uttar Pradesh has emerged. It shows a police official interrogating a man after an SUV ran over protesting farmers in the district. Eight people, including four farmers, were killed in the incident on Sunday.

NDTV cannot independently verify the authenticity of the video.

The man, in a soaked white vest with blood trickling down his cheek, is sitting on the ground, while the police official, on his haunches and with a mike in hand, is seen questioning him.

The policeman fires a volley of questions at the man from Lucknow’s Charbagh area.

The man says he was in a black Fortuner that had five people in it. He said he was sitting in the back of the car and claimed that the vehicle belonged to an former Congress MP. He then gives out the car plate number.

“Aage ek aur gaadi thi. Woh kiski thi (Who was in the car ahead),” asks the policeman.

“Thar kiske saath thi itna bata do (Who was in the Thar, just tell us this),” the policeman presses him.

“Matlab sab unhi ke log they na (Means, they were all his men),” the cop presses on.

“Haan sab unhi ke log the (Yes, they were his men),” he acknowledges.

In an earlier video that was viral, a Thar was seen running over slogan-shouting farmers marching in the district with a black Fortuner tailing the SUV that hit the farmers.

NDTV cannot independently verify the viral clip’s authenticity. It is also not clear from the video who is in the driving seat. Other than opposition leaders, the video has also been shared by Varun Gandhi, an MP from the ruling BJP.

The farmers have alleged that the protesters were run over by an SUV driven by the Union Minister’s son.

Union Minister Mishra has told NDTV that the vehicle seen running over farmers, allegedly triggering the clashes, was indeed his. However, the minister said neither he nor his son was present at the spot when the incident happened.

A murder case has been filed against the Union minister’s son. However, he is yet to be arrested.