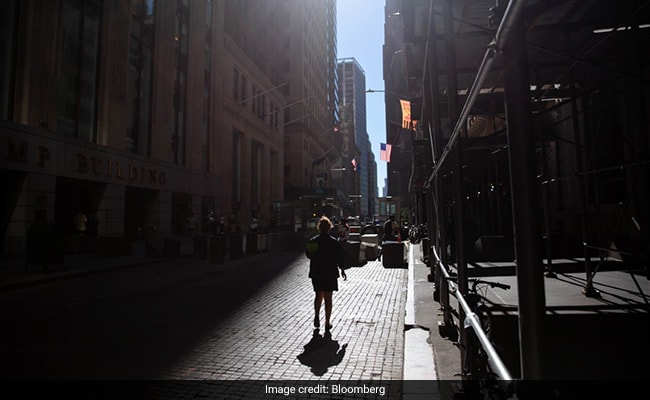 Theres a pervasive belief that the market can bend, but not break, the equity strategist said.

A “cathartic upchuck” in the stock market could send the S&P 500 down 10% in the first half of the year as the Federal Reserve tightens monetary policy and valuation multiples compress, according to Chris Harvey, the head of equity strategy at Wells Fargo & Co.

Harvey joined Bloomberg’s “What Goes Up” podcast to talk about this and other elements of his 2022 outlook. Below is a condensed and lightly edited transcript of the conversation.

Q: Was the market’s reaction to the Fed minutes on Wednesday reasonable?

A: It’s a reasonable reaction. For a while, people had been questioning whether the Fed had the wherewithal and the will to fight inflation. There was talk about transitory for too long. Powell recently retired that phrase or said he was going to retire that phrase. And then when you listen to the minutes, they mean business. And people are finally realizing that the Fed will do what they need to do to fight inflation, and that’s troubling.

But more importantly, what’s really happening underneath the surface and behind the scenes — you have to keep a very, very sharp eye on real rates. What we’ve noticed all of last year is as real rates go, much of the relative price in the equity market goes. So real rates go up, that cyclical trade works. Real rates go down, and that long-duration or that tech growth trade works. And what’s happening right now is real rates are going higher, tech and high growth are rolling over. That’s a big part of the market.

Q: Fed’s Neel Kashkari, who traditionally has been very dovish, is expecting two hikes in 2022. Is that like cold water to the face to some degree?

A: Last year, I was a little dumbfounded because we were looking and we were listening to transcripts, we were looking at pricing. I had never seen — in my more than two decades on Wall Street — this kind of pricing environment. At one time, I had asked one of my associates, ‘Hey, give me a handful of stocks that are raising prices.’ He said, just pick any three. And at the end of the day, I was surprised that it’s taken this long for the Fed to react. But now the Fed is reacting and you’re seeing breakevens and you’re seeing inflation expectations come down.

There was a lot of talk about stagflation two, three, four months ago. You have to take stagflation off the table because the Fed is fighting inflation. The other thing that’s happening is February 1 kicks off Chinese New Year. That’s when goods start to slow into the U.S. I’m not saying the supply-chain is going to be fixed, but really what we think the market will latch onto is: Have we seen peak pressure or peak congestion? Will we be able to make some improvements? And if so, that’s really important because that has significant ramifications for pricing, multiples and margins.

Q: You expect a 10% correction by summertime. What makes you confident in that prediction?

A: There’s a pervasive belief that the market can bend, but not break. The market can go down 5%, we can break through the 50-day, we can hit the 100-day, but we really can’t collapse. Well, we’re in the second-year recovery, and typically in the second-year recovery you have multiple compression and you have a lot of other interesting things happening. What you have is growth decelerating, you have a more aggressive Fed, you’re lapping very difficult comparisons and you have the speculation.

One of the things that’s helped a lot of these names is you’ve had money chasing performance — when the performance isn’t there, then the money goes away. And we think that people are going to sell weakness for the first time in a while for fundamental reasons, for technical reasons. Another operative word for 2022 is normalization. We’re going to use this word time and time again.

Q: What do you recommend to clients as to where they should be invested?

A: What we tell them, from the 5,000-foot level, is you want to go up in quality and want to go down in risk. And when we talk about quality, it’s companies with better balance sheets, you want cash on the balance sheet, you want less leverage, you want better management teams, good stewards of capital. And then you want to stay away from the poor secular stories. So you want to focus on more-attractive profit margins. And we just want to stay away from the more risky-type stories because we just don’t think you’re getting paid. A year and a half ago, that was a different story. Right now, you’re not getting paid for that.

We’re much more focused on factors and style. And one of the things that we like about quality is one, you’re not paying up. You’re not paying through the nose for higher quality. Two, you’re late in the cycle, and usually late in the cycle is the right time for quality — quality does better when growth is slowing down as opposed to early in the cycle where growth is really accelerating. And the last thing is quality does much better to the downside. You can participate to the upside, but really our focus is on the downside and quality should help you in that down tape. So, really you want to take on more quality, you want to reduce the risk in the portfolio. It’s time to start building up some dry powder for a rainy day.

Q: Is the growth-at-any-price trade dead for good?