Few cars get a mad reception or rush when they arrive to the market. Fewer still get instant blockbuster status. No surprise that the car to get both those is an SUV, and a Mahindra SUV no less. The XUV700 is the car in question, and ever since it debuted on the eve of India’s 75th independence day, it has created quite a storm. And one key reason amongst many others like design, engineering, features and performance – was its entry pricing. Yes, that got a lot of attention. And so today I want to tell you what the Mahindra XUV700 MX Series entry variants are all about.

Are they a bare bones, stripped-down, entry versions – that no one would really want? Or is it something more? As I found out – base variant, need not mean basic variant. As the XUV700 goes, the MX Series kick off its range. What began as introductory pricing has now moved up by ₹ 50,000 on the MX, so prices now read as ₹ 12.49 lakh (Petrol, manual) and ₹ 12.99 lakh (Diesel, manual) ex-showroom. 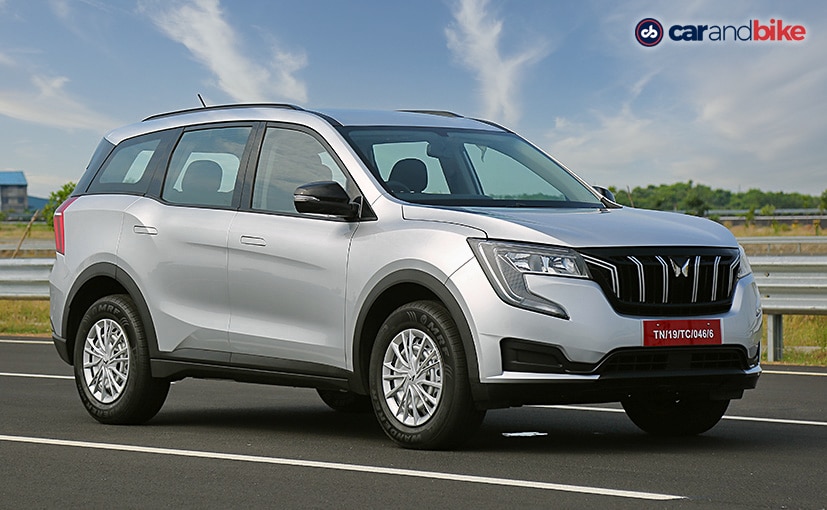 The Mahindra XUV700 MX variants will not strike you as different at first glance. In fact you must look closely to see the differences. And they only become truly apparent when you put an MX next to say an AX7. Yes, it is a base variant, so while there may be no rear defogger, rear wiper, chrome garnish on the window-line, and biggies like no daytime running lights or DRLs, you still get a fair amount of kit. You do still get the full LED taillight cluster that’s a signature of the XUV700 design. 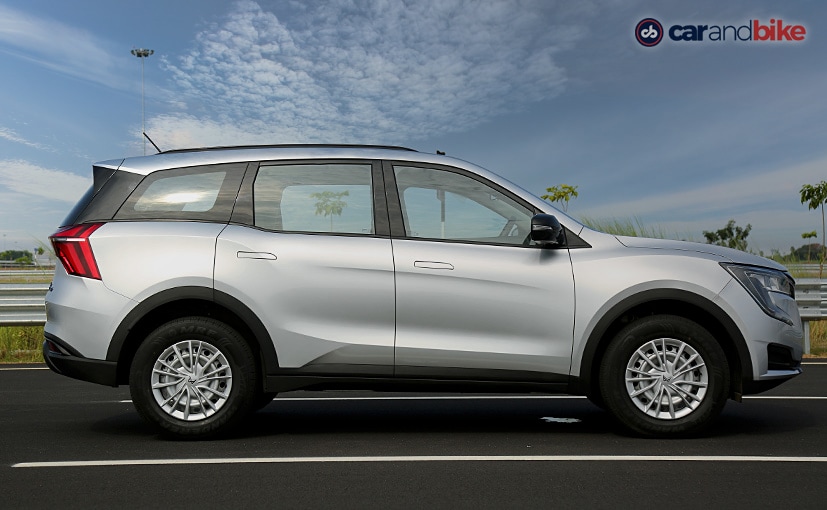 Surprisingly, even the entry-level MX variants get the flush-fitting door handles, which is a great way to maintain the integrity of the design

The way the tailgate, muscular fenders, grille, and roofline are shaped remains consistent with higher variants. And you still get the ‘smart’ door handles as Mahindra is calling them. And you know what? That’s going to be a talking point of this car for sure. And why not, it’s a very clever little design element. And the fact that these aren’t electrically deployable in the MX doesn’t matter much. And that’s because to open the doors you ush at the handle’s end, and the handle pops up mechanically. It then has a spring-loaded action when you pull at it. This opens the door, and the same stretched spring snaps the handle back into the door body – flush with the metal again. I really think that’s clever since it’s a great way to maintain the integrity of the design. And not resort to offering regular handles on the base trim. That is really, really smart. 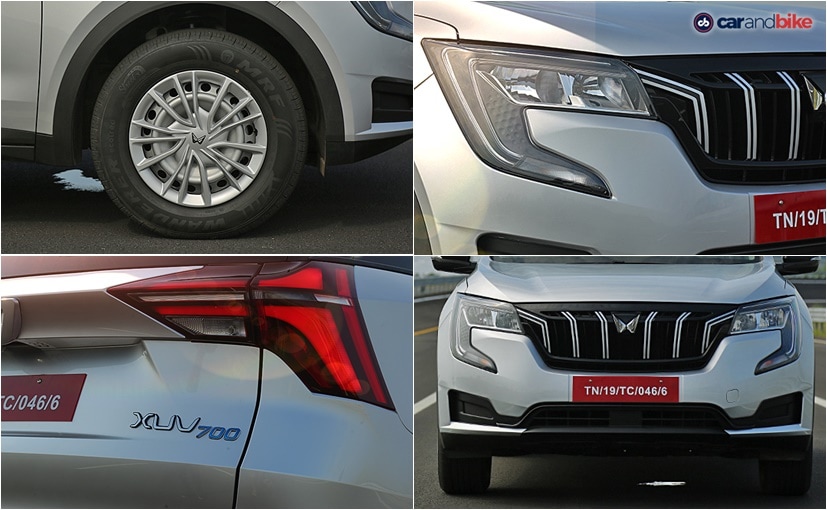 The Mahindra XUV700 MX variants come with halogen headlamps, steel wheels with cover, and no foglamps but you do get LED taillamps

Besides that while you get the glossy piano black grille with metal design elements, the headlamp cluster is not all LED. And the DRLs disappear, yet the same shaped chrome element is maintained so you don’t notice the difference immediately. The same ends in the indicator now – to complete the look. No alloy wheels, but the steel rims are still 17-inchers with 235/65 tyres. The wheel cover is not the most gorgeous though! But overall the MX Series of the Mahindra XUV700 doesn’t look like an obviously lowered or stripped-down variant. Not at all, it in fact still looks very aspirational. And that’s the trick. 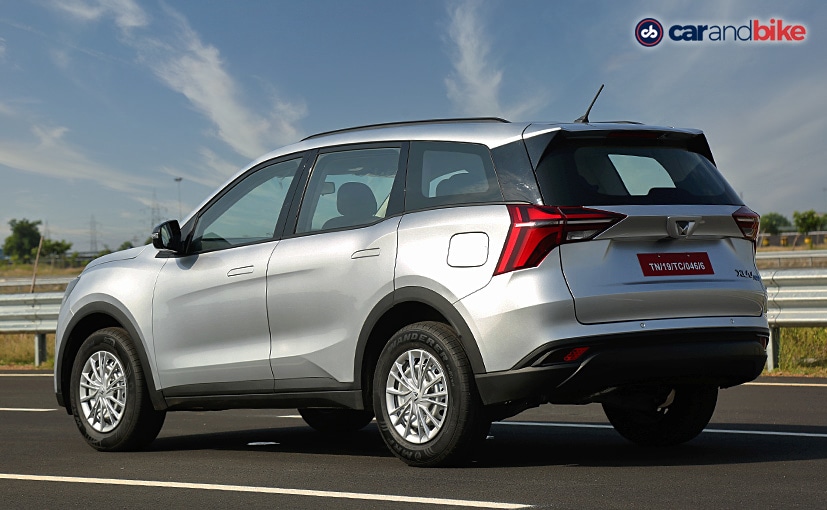 Except for the bright electric blue colour, the Mahindra XUV700 MX variants are available in all colour options

To not just give the semblance of an upmarket offering, but by truly giving big car size, big car appeal, and big car design – in a great value package. The MX variant is available in 4 of the 5 colours on offer. This means the silver, bright red, very dark blue, and white. But not the bright electric blue – that is saved for the AX or Adrenox series.

The XUV700 MX also gets both fuel type options, but while it is only manual at word go, an automatic petrol MX is likely a few days down the line. The petrol gets you the modern mStallion turbo GDI engine – same as higher trim option variants. And this is great – because on most competition cars the turbo is saved for higher variants only, while the base usually gets an older naturally aspirated motor. On the diesel side there is a change. But it is a differently tuned variant of the same new mHawk engine. It delivers 153 bhp, while the higher variants get the more powerful 182 bhp avatar. 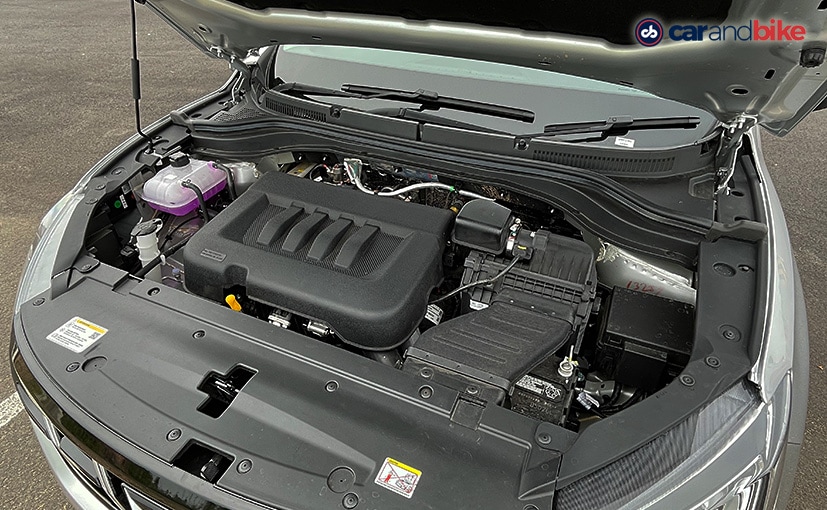 The XUV700 MX variants get the same 2.0 litre GDI petrol engine, but the 2.2 litre mHawk diesel engine is a differently tuned variant 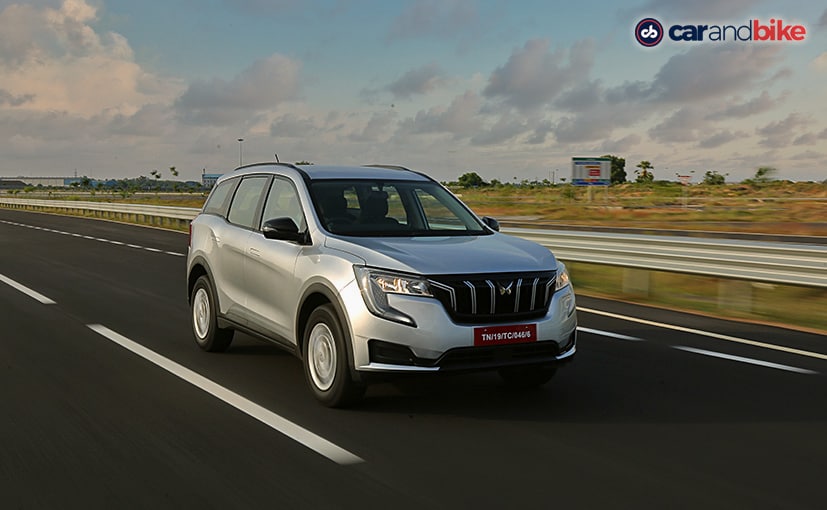 The 2.2 litre mHawk diesel engine of the MX variants delivers 153 bhp, compared to the higher-spec AX variants, which get the more powerful 182 bhp avatar

I had the chance to drive both engine types, but spent more time with the diesel for obvious reasons. Alright, so on paper there’s no beating about the bush on the fact that the MX diesel is lower on power output to the AX. But that will bother you, only if you start comparing to the higher output variants. By itself, the diesel MX is actually fun to drive. At no point do you find it underpowered, given the shape, size, segment, and weight of this vehicle. There was absolutely no problem driving this, as you get ample amount of torque, and a good amount of punch too. And so, honestly that was a huge doubt crossed off my list. And just as well, because that means the MX diesel will still satisfy the XUV500 cult that has a certain expectation of muscle and grunt from this new vehicle. However, sound damping could be a bit better between the engine bay and cabin. NVH levels on the AX series seem better.

Also Read: Planning To Buy The Mahindra XUV700? Here Are 5 Things You Should Know 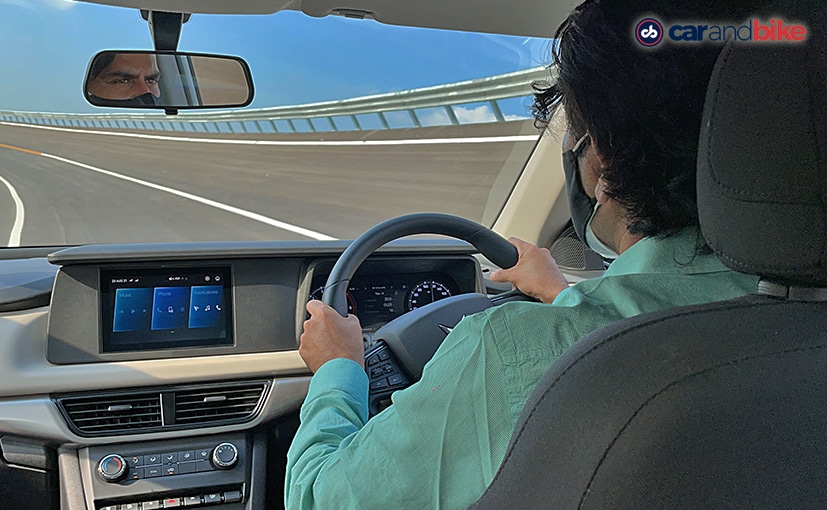 The diesel engine of the XUV700 MX variant is certainly not underpowered, but NVH levels on the AX series seem better

And if you consider the petrol side of things on the MX, which is anyway the least expensive XUV700 you can buy – well then that’s where I think a lot of people have missed a beat. And that is because you’re getting the same petrol engine that you will get on higher variants – and that means you get all that power, all that torque, and the latest technology – which is turbo GDI. And as I said earlier with an automatic option on the way, things will really seem very compelling on the MX after all. This is the first variant then, and not a base variant. And that is unusual to see these days. Most brands offer a stripped-down basic car with an entry price – and then never bother marketing or even making that option. On the whole, the MX series still has excellent ride quality, and handles just as well as other variants. 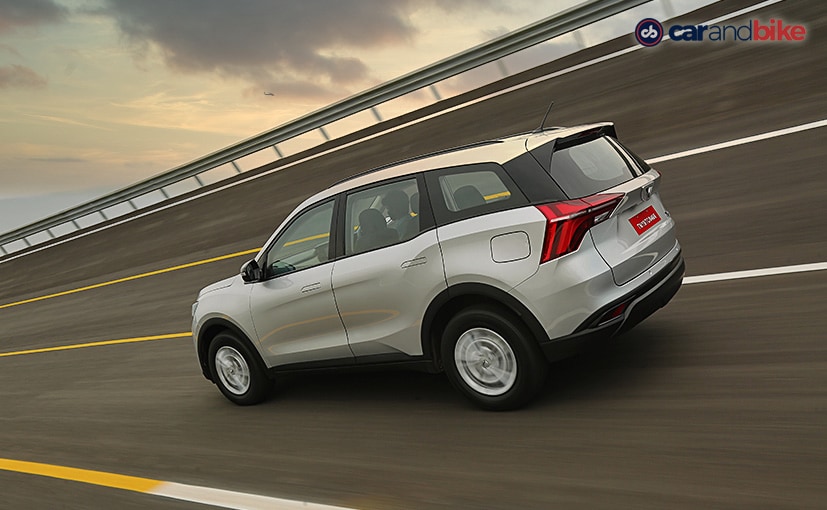 The petrol version of the MX series gets the same 197 bhp 2.0 litre GDI turbo petrol engine as the higher-spec AX variants

The cabin of the MX retains the same layout, material, and colour palette as the AX3 and to some extent the AX5 variants. The big difference is the lack of the dual 10.25-inch screen interface (touchscreen infotainment + digital instrument cluster). Instead you get an 8-inch touchscreen system and a 7-inch screen in the cluster. The good part is that the latter is still a full colour display and not just a monochrome digital trip computer! And the graphics and style is like that in the bigger system. The only bummer is that its function keys are on the panel on the right of the steering wheel (where you sometimes have things like light switches in some cars), and not on the steering wheel. On the steering therefore the right side has a dead space, while the left still gives you some steering mounted controls like music, phone etc. I do feel the design of those dials in the instrument cluster could have been way sexier and more modern looking. 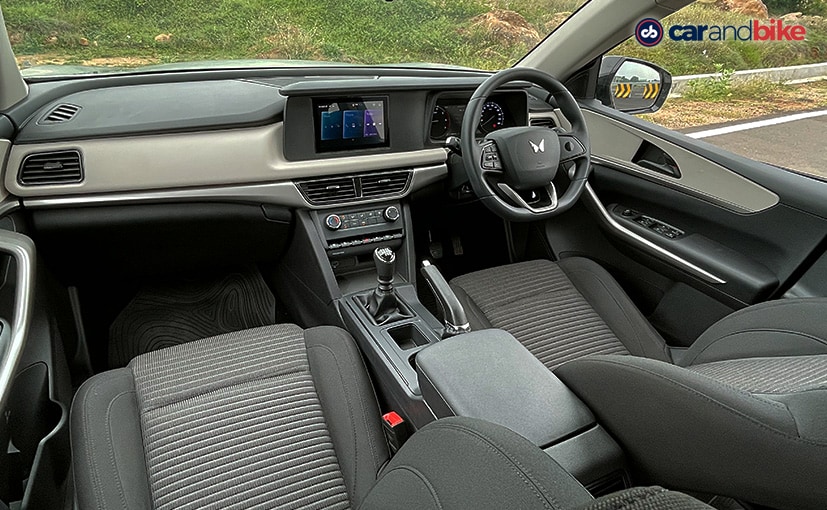 The cabin of the MX variants retain the layout, material, and colour palette as the AX3 and to some extent the AX5 variants

On the infotainment side, it’s a similar graphic look; and while it won’t give you some functions of the larger Adrenox system like wireless Apple CarPlay, you still get a fair bit – including wired smartphone connectivity, and being able to move widgets around on the customisable home screen. So while the screen is not huge, and 8-incher is not small either. Okay, so you don’t get the leatherette upholstery from the AX7, and the screens are smaller – but there is nothing downmarket, cheap, or bare bones about this cabin. 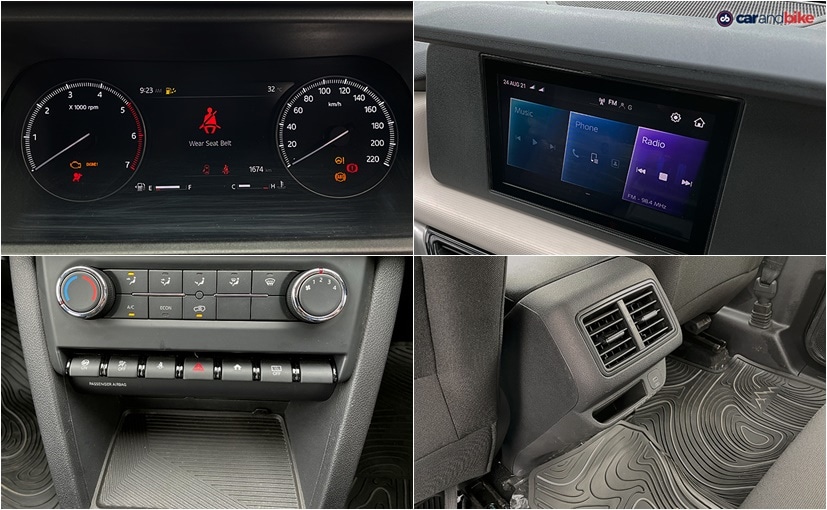 It will still stand tall against many rivals – especially some cars that sit in lower segments but at similar price points. And that’s because it’s also got the same kind of plastic level that you see in the higher variants. That’s smart thinking yet again by M&M. It is only a five-seater though, you don’t get a seven-seat layout on the MX. And that’s okay, because a lot of people who will consider the MX are likely considering only 5-seater compact or subcompact SUVs anyway. 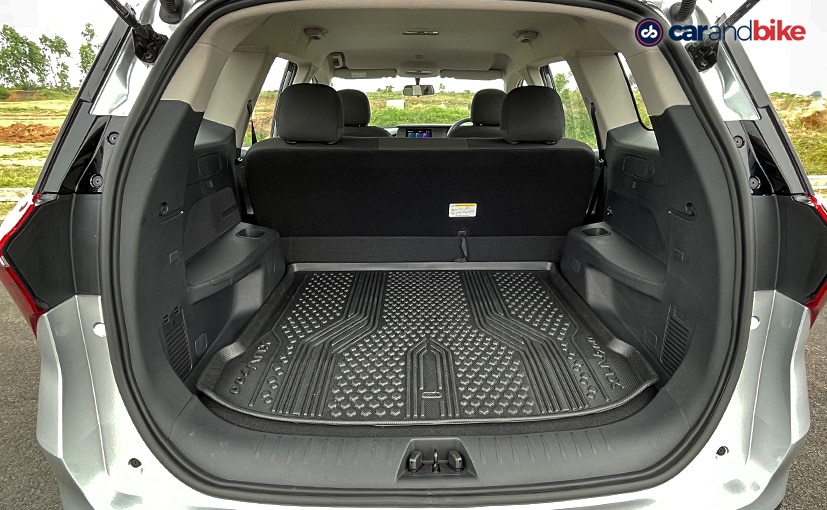 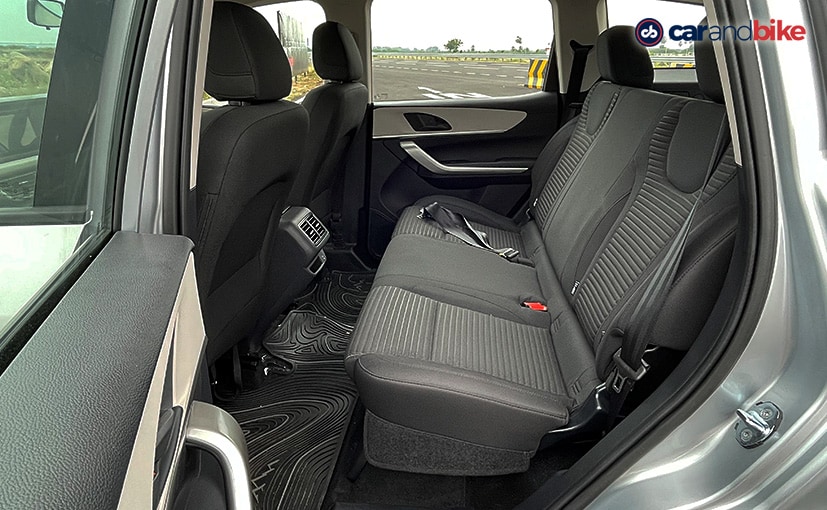 In terms of safety features, the XUV700 MX variants gets dual airbags, ABS, and ISOFIX child seat anchors among others

This is a roomy cabin, that’s pretty-well appointed, gives you some good features, and yes retains the big car feel. And the great news is that the suspension and therefore ride and handling are right up there like the higher variants too. So, on the XUV700, I reckon that Mahindra is likely to have its hands full on the MX variant too. The cat is very firmly amongst the Korean, Japanese and other pigeons! Let the games begin! 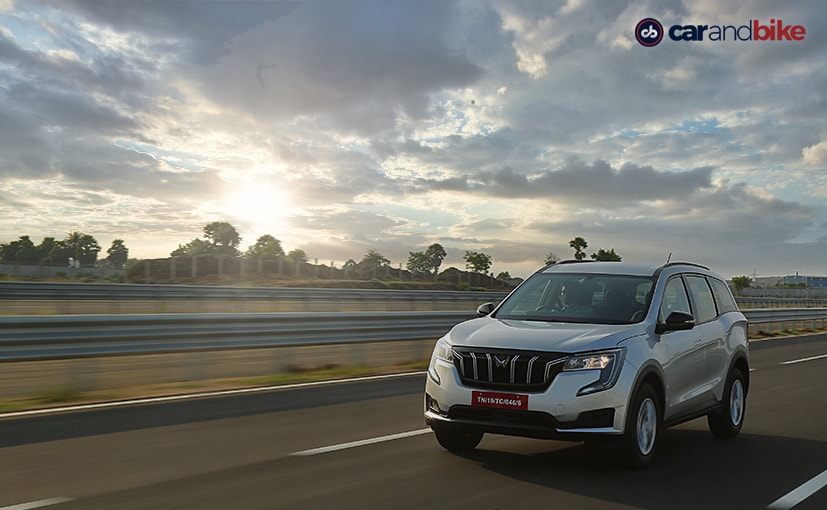