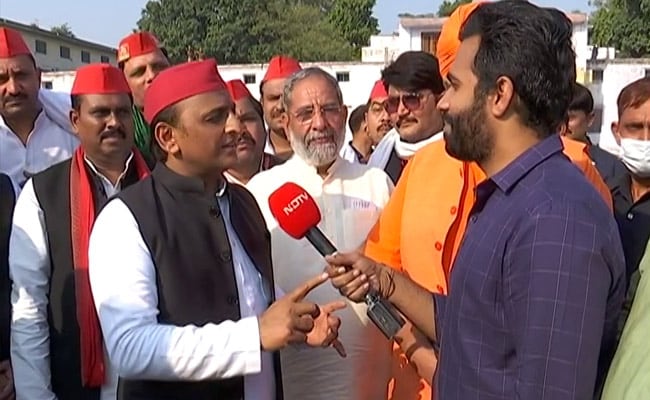 Akhilesh Yadav underlined the importance of the Muzaffarnagar seat

A pincer movement by angry farmers in western Uttar Pradesh and regional parties in the eastern part of the state will wipe out the ruling BJP in next year’s election, Samajwadi Party chief Akhilesh Yadav told NDTV on Thursday.

Addressing a rally in UP’s Muzaffarnagar district, Mr Yadav said the alliance between his outfit and the Suheldev Bhartiya Samaj Party (SBSP) would help close the doors for the BJP in this part of the state.

“There will definitely be a change in 2022. The people of Muzaffarnagar have never failed the Samajwadi Party (and) since OP Rajbhar (the SBSP chief) joined us, the doors to the east have been closed to the BJP,” Mr Yadav told NDTV.

Mr Rajbhar – who served for two years as a minister in Chief Minister Yogi Adityanath’s government – and Mr Yadav said last month that they would fight for the rights of Dalits and other weaker sections of the society.

The SBSP has only four MLAs in the 403-member UP Assembly but the party is influential in over a dozen districts in the eastern part of the state.

No formal seat-sharing announcement has, however, been made.

“I am telling you that the people of west UP will also close the doors to the BJP… the farmers who are protesting against the three “black” laws have decided to wipe them out. Then how can they stay in power?” Mr Yadav asked.

The former Chief Minister underlined the importance of the Muzaffarnagar seat, which has swung between the Samajwadi Party and the BJP since 1996. The BJP’s Kapil Dev Aggarwal holds the seat now, having won it in the February 2016 bypoll.

“This is the land of Chaudhary Charan Singh,” Mr Yadav pointed out, referring to the late former Prime Minister and twice, briefly, UP Chief Minister, who won admiration for his agricultural policies and commitment to farmers’ causes.

“It is the farming belt. Farmers held a large protest here recently… and today many issues revolve around them – Will their income be doubled? Will the three “black” farm laws be taken back?”

Reaching out to farmers, Mr Yadav asked them: “Brothers… tell me, has your income increased or decreased, because they (the BJP) said it would be doubled. Prices of goods has gone up… petrol and diesel prices have gone up.”

Farmers from Uttar Pradesh, Haryana, Punjab, and other states have been protesting the BJP’s farm laws for over a year now, and have made no secret of their plan to campaign against the ruling party for next year’s election.

They held a massive meet in Muzaffarnagar in early September, and warned Chief Minister Yogi Adityanath that they intend to carry their message across the state.

Over the next six months, the farmers said they plan to hold 17 such mega meetings in cities across UP, including Lucknow, Varanasi, and Gorakhpur.

Rashtriya Lok Dal leader Jayant Chaudhary was at that meeting, and the party has confirmed its alliance with the Samajwadi Party. Seat-sharing talks are ongoing.

Asked for an update on those talks, Mr Yadav said: “We had an alliance with the RLD in 2019. That alliance is intact… there are issues over seat-sharing. We are trying… Hopefully, we announce an alliance soon.”

Uttar Pradesh votes for a new government next year, and polls in the country’s most populous state are widely seen as a bellwether for the national election.

With Lok Sabha polls due in 2024, the BJP will be keen to not only retain power in UP, but also do so with a commanding mandate to reinforce its edge after multiple defeats in the April-May round of Assembly elections.