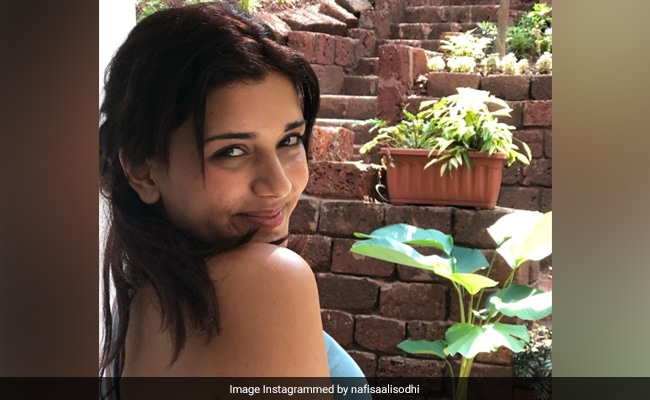 Nafisa Ali is here to beat our midweek blues with a fresh set of pictures from her Goa diaries. This time, the veteran actress has decided to drop a bunch featuring Sara Ali, singer Lucky Ali’s daughter with his second wife Inaya. Nafisa Ali and Lucky Ali are good friends. The actress mentioned it in her caption. “This is Sara Ali (my friend Lucky Ali’s 2nd daughter).” Let’s talk about the photos now. In the opening slide, we see Sara striking a pose for the lens. In one of the pics, Sara is holding Nafisa Ali’s pet Coco in her hands as she smiles for the camera. Nafisa Ali’s followers were quick to share their reactions in the comment space. She is super gorgeous,” wrote a user. Another said, “May she be blessed with success.”

Lucky Ali shares a great bond with his children, and his Instagram timeline is proof. We found this adorable moment on the singer’s page featuring himself, Sara Ali and son Raiyan Ali. Lucky Ali is sitting on a chair as Sara and Raiyan stand behind him. “Sara, Rayu and Baba,” read the caption.

The next picture has left us in complete aww. The father-daughter duo is seen sharing a warm hug here.

This throwback picture photo shared by the singer shows how Sara Ali prefers to spend her time with her father. The singer is seen piggybacking a toddler Sara, as he describes her in the caption, “Baba and little Rangeenda panda.”

What do you think about the father-daughter bond?