There is also 80s style burgundy upholstery and the overhead lighting on the inside is also quite special because of the infinity mirrors.

Hyundai has updated its 1986 Grandeur in an electric car as a part of its heritage series models. The first model was the Pony electric restromod which was launched in April. This time around it was the turn of the Grandeur which was first launched in 1986 as it celebrates its 35th anniversary.

The Heritage series Grandeur has a retro-futuristic feel from the inside out with an all-electric powertrain which also gets a battery and motor which replaces the internal combustion engine. The project was the handiwork of Hyundai’s interior design team because the major changes in the car come from within. 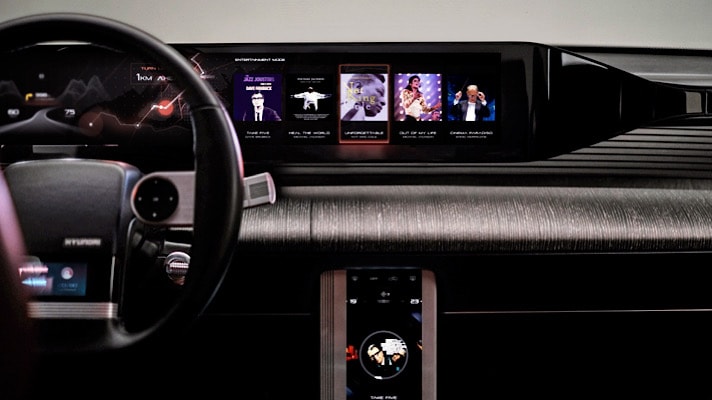 The car features modern interiors and an 18-speaker sound system

But there are changes to the exterior as well with a new grille, wheels, mod lines, and side-view mirrors. The lights now get the Ioniq 5 style LED pixel clusters that remind one of an 80s video game. With these updates, the car gets modern conveniences but also retains the boxy feel of the original.

On the inside, the changes are more sweeping. The dashboard gets an ultra-wide display supported by a vertical touch screen at the bottom center of the console which is used for multimedia, driving modes, and air conditioning. It even gets a digital piano function.

There is also 80s style burgundy upholstery and the overhead lighting on the inside is also quite special because of the infinity mirrors that emit a bronze coloured light which is normally seen in vintage audio gear. There is also an 18-speaker 4 way sound system with a mid-woofer, main woofer, mid-range speakers, and tweeters. Suffice to say it is quite decked out.