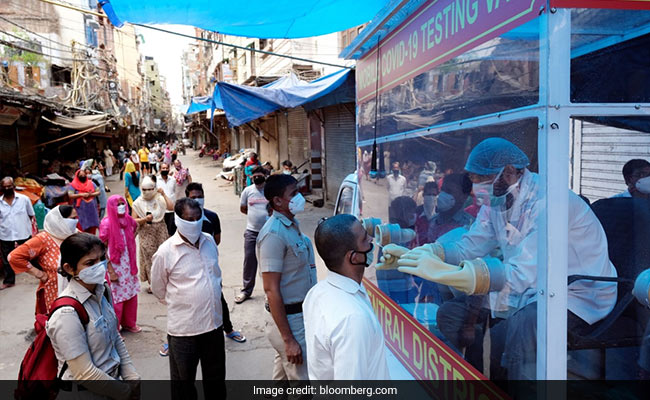 India may see a spurt in the Covid-19 growth rate within days and head into an intense but short-lived virus wave as the highly-infectious omicron variant moves through the crowded nation of almost 1.4 billion.

“It is likely that India will see a period of explosive growth in daily cases and that the intense growth phase will be relatively short,” Paul Kattuman, professor at the Judge Business School at the University of Cambridge which has developed a Covid-19 India tracker, wrote in an email. “New infections will begin to rise in a few days, possibly within this week,” he said, adding that it was hard to predict how high the daily cases could go.

Kattuman and his team of researchers, developers of the India Covid tracker, are seeing a sharp rise in infection rates across India. The tracker spotlighted six states as a “significant concern” in a Dec. 24 note, with adjusted growth rate of new cases exceeding 5%. This had expanded to 11 Indian states by Dec. 26, according to the tracker, which corrects for “day of the week effects” and other variations.

India added 9,195 Covid cases Wednesday –the highest new daily cases in three weeks — pushing the total confirmed tally to 34.8 million infections. The total number of fatalities so far is 480,592 deaths. The country is already gearing up to prevent another massive outbreak even though only 781 cases of the highly-mutated omicron have been identified so far.

New Delhi closed cinemas, schools and gyms and introduced restrictions on public gathering on Tuesday — a day after it reported the most new cases in more than four months. Night curfew kicks in from 10 p.m to 5 a.m. and bars, restaurants as well as offices will have 50% occupancy. Mumbai, the country’s financial capital, also reported a surge in new cases to 1,377 on Tuesday.

These policy decisions underscore hard lessons India learned after a deadly delta-led virus wave in April and May that pushed infections to a record-beating 400,000-plus each day. It overwhelmed the country’s hospitals and crematoriums and left its citizens pleading for oxygen and other medical resources on social-media platforms.

The Cambridge India tracker had correctly called the peak of this devastating second wave in May and also forecast in August that India would see a slow burn in its Covid infections curve until the vaccination coverage was sufficiently high. India crossed 1 billion administered vaccine doses in October and new cases plunged in tandem with that milestone.