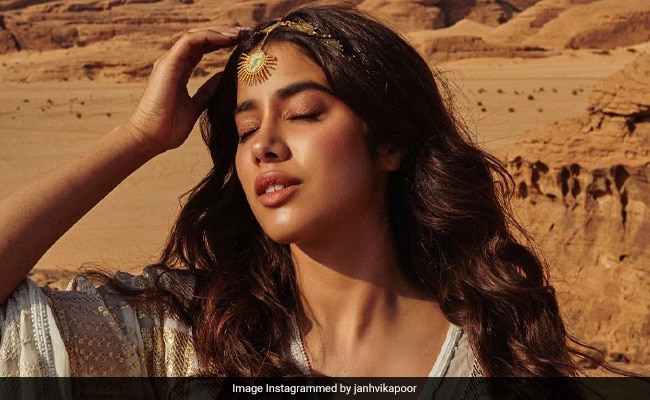 For Janhvi Kapoor, nothing is devoid of splendour. The actress loves to take her charm to every place she visits. Given her impeccably confident personality, we aren’t surprised that she has brought a “golden” touch to the sandy lands of Saudi Arabia. The actress has been making the most of her trip. A recent Instagram post shows her standing in an ivory-and-gold kaftan dress against an expanse of desert. Janhvi’s caption gives us more insight into her outlook on the place. She wrote, “Where you see barren land, I see golden sand.”

Here are more photos of Janhvi Kapoor from the Al ‘Ula region of Saudi Arabia. In these images, she reclines on the huge rock formations of the desert.

Christmas brought us a surprise present from Janhvi Kapoor. The actress appeared before her Instafam with her Aksa Gang after a break. The hilarious Christmas video saw Janhvi and her friends grooving in funky steps to Himesh Reshammiya’s song Ice Cream Khaungi. Elf hats, coats, shootings, and fun banter are the part and parcel of this video. Janhvi captioned the post, “Merry Christmas frndz.”

Janhvi Kapoor’s Instagram posts are about fun posts, quirky captions and glamorous looks. Recently, she brought all of these vibes to one place when she took up the role of Poo/Pooja from Karan Johar’s 2001 film Kabhi Khushi Kabhie Gham. The role was etched in our minds by Kareena Kapoor’s stellar acting in the film. Janhvi channelled her inner Poo by standing in front of the mirror and lip-syncing the famous dialogues, “How dare you? Tumhara koi haq nahi banta ki tum itni sundar lago (you have no right to look so beautiful). Not fair.” Her caption read, “Name one thing more iconic than Poo. I’ll wait. Maybe forever.”

Janhvi Kapoor made her Bollywood debut in 2018 with Dhadak, co-starring Ishaan Khattar. She went on to feature in Ghost Stories and Gunjan Saxena: The Kargil Girl. She was last seen in the horror-film Roohi.