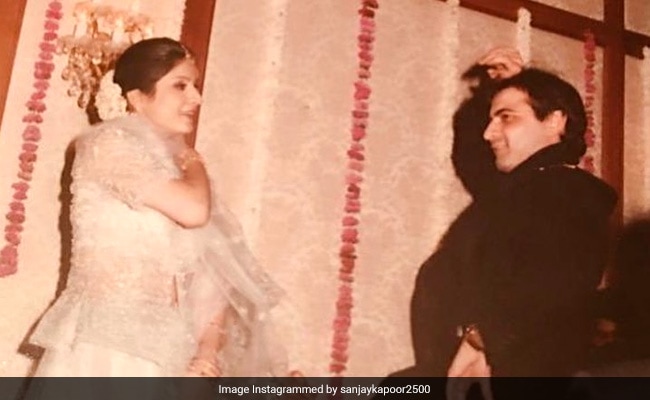 Maheep and Sanjay Kapoor in a throwback. (courtesy: sanjaykapoor2500)

Sanjay Kapoor is loved on social media for his candid takes and candour. From throwback pictures and videos to posts about his family and work, Sanjay Kapoor’s social media timeline is one fun place. Now, the actor has taken a walk down memory lane, by posting a picture with his wife Maheep Kapoor. In the image, Sanjay Kapoor can be seen pulling off a rather Bollywood-inspired dance move, as Maheep Kapoor watches him. In the caption, Sanjay Kapoor wrote, “Pappu can dance saala,” along with the hashtags “throwback”, “sangeet night” and “6th December 1998”.

This throwback picture of Sanjay Kapoor’s comes close on the heels of another vintage image shared by the actor. This time around, a black-and-white image features a baby Sanjay Kapoor on his mother’s lap.  In the caption, he wrote, “My beautiful mother and I.”

Last month, on the occasion of Sanjay Kapoor and Maheep Kapoor’s 23 rd wedding anniversary, the actor shared a montage video with clips from their wedding as well as pictures of their children Shanaya Kapoor and Jahaan Kapoor.

Before that, to mark daughter Shanaya Kapoor’s first day of shoot of her debut film, Sanjay Kapoor shared a set of pictures and wrote, “New beginnings. So proud of you. Work hard, focus. This is only the beginning, the sky is the limit, first-day shoot, exciting times. Love you.”

Sanjay Kapoor made his debut in the 1995 film Prem opposite Tabu. He is known for his work in films such as Raja and Kal Ho Na Ho, among others. Sanjay Kapoor will be seen alongside his Raja co-star Madhuri Dixit in Netflix’s Finding Anamika.