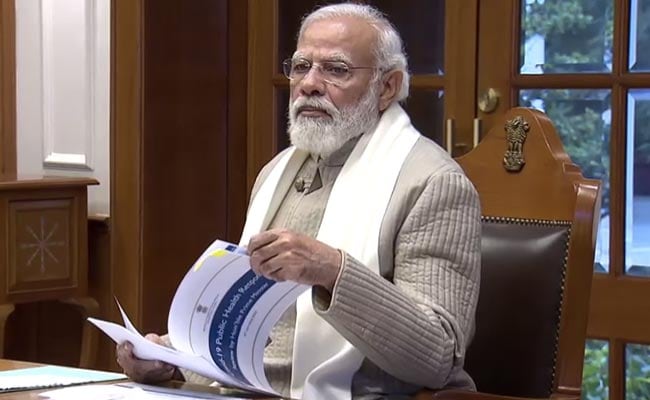 Prime Minister Narendra Modi held a high-level meeting this evening to review the Covid situation in the country. The meeting comes amid a frightening surge in daily new cases; this morning nearly 1.6 lakh were reported in the previous 24 hours – a massive spike from the 27,553 seven days ago.

PM Modi last held a Covid meeting December 24, at which he urged officials to stay ‘satark‘ (alert) and ‘saavdhaan‘ (vigilant’) as India scrambles to contain a third wave of infections.

“In view of the new variant, we should be ‘satark‘ and ‘saavdhan‘. The fight against the pandemic is not over and the need for continued adherence to COVID safe behaviour is of paramount importance even today,” the PM had said.

Since then, India’s active cases have gone from less than 80,000 to nearly six lakh, with a worrying number of doctors and healthcare workers – the first line of defence against the virus – testing positive, including hundreds in major cities like Delhi, Mumbai, and Bengaluru.

UP, Punjab, Goa, Manipur, and Uttarakhand will hold polls over seven phases starting February 10, the Election Commission announced yesterday. The top poll body had been urged by the Allahabad High Court to postpone elections in view of the Covid emergency.

However, after meetings between the Commission, the Union Health Ministry and medical experts, Chief Election Commissioner Sushil Chandra said polls would be held as scheduled.

In view of Covid, however, the Election Commission banned all physical rallies, roadshows, and meetings till January 15 and ordered an 8 pm to 8 am curfew on political activity.

Voting time has been extended by an hour and only 1,250 people will be allowed per both, with states urged to ensure that all voters and polling staff are, at least, double vaccinated.

The government has warned that the Omicron variant is up to three times more infectious than the Delta that swept through the country in the second wave.

India has reported 3,623 cases of the Omicron variant since it was first reported in South Africa in November last year; the first case was reported on December 2.

The true spread of the Omicron strain in the country is still unclear, given delays in genome sequencing of samples to confirm the new variant.

The Delta variant, which accounted for over 60 per cent of India’s Covid cases before the third wave, remains active in the country as well, the government has said.