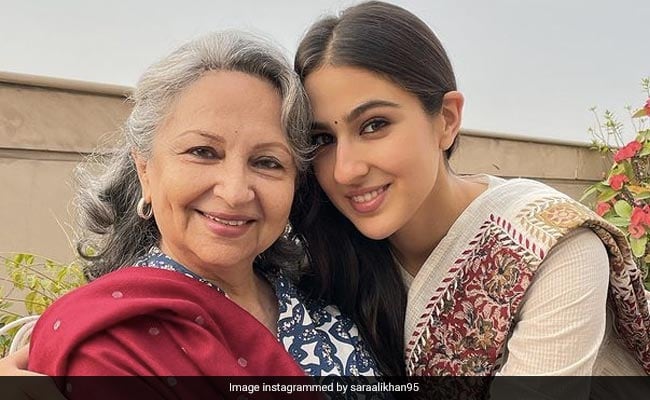 Sara Ali Khan, who recently starred in Atrangi Re, co-starring Dhanush and Akshay Kumar, in an interview with Bollywood Hungama revealed how her family reacted to her performance in Atrangi Re. Speaking of her grandmother Sharmila Tagore’s reaction to the film, the 26-year-old actress said, “My daadi is sending me feedback that she has been receiving. People are messaging that she should be proud of her granddaughter. Aur meri daadi ka pet name Rinku hai, it’s also the name of my character. Therefore, some people are messaging that ‘it’s so nice to see junior Rinku.’ In short, it’s very touching and overwhelming.”

Sara Ali Khan also talked about her dad Saif Ali Khan and mom Amrita Singh are reacting to the film and she told Bollywood Hungama, “While they really, really enjoyed the film, the biggest thing is that they are both sending me messages, reviews and tweets of what other people are saying about my performance. As actors, I think they understand that it’s important to know what others are saying about our work.”

Sara Ali Khan’s parents Saif Ali Khan and Amrita Singh are also actors. Her father is now married to Kareena Kapoor, with whom he has two sons.

Sharmila Tagore, who was launched by the iconic filmmaker Satyajit Ray in the 1959 Bengali film Apur Sansar, stepped into Bollywood with the 1964 film Kashmir Ki Kali. She has worked in many successful Bollywood films like Aradhana, Chupke Chupke, Amar Prem among others. Sharmila Tagore married legendary cricketer Mansoor Ali Khan Pataudi in 1969. The couple welcomed son, actor Saif Ali Khan, in 1970, daughter Saba, who is now a jewellery designer, in 1976 and actress-author Soha Ali Khan in 1978. Mansoor Ali Khan Pataudi died after battling a lung infection at the age of 70 in 2011.