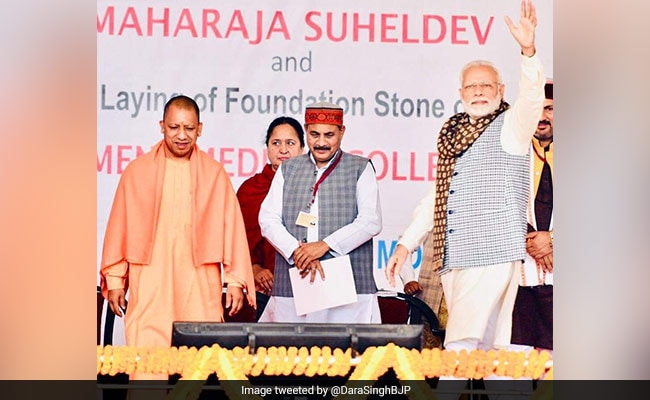 A second minister, Dara Singh Chauhan, has quit Yogi Adityanath’s cabinet in Uttar Pradesh, continuing a flurry of exits that started with Swami Prasad Maurya’s shock resignation yesterday. This is the second OBC (Other Backward Class) leader to quit team Yogi just before the Uttar Pradesh election next month.

Mr Chauhan, from eastern UP, was the minister for environment and forests in the Adityanath government and had joined the BJP in 2015, after years in the Bahujan Samaj Party (BSP). He was made the head of the BJP’s OBC Morcha – a plum post, and then a minister after he won the 2017 assembly election. When in BSP, Mr Chauhan was a Lok Sabha MP between 2009-14 and a Rajya Sabha MP in the late 90’s.

“It cannot be that I say something on one day and then resign the next day. I hoped my voice would be heard sooner or later. But when things came to the point that no one was willing to listen to me, I had to resign,” Mr Chauhan told NDTV when asked why he was quitting just before the elections.

In a huge blow to the BJP as it seeks re-election in India’s most politically vital state, two ministers and four MLAs have quit so far and are set to join the Samajwadi Party of Akhilesh Yadav.

“I worked with dedication but I am resigning as I am hurt by this government’s oppressive attitude towards the backward, deprived sections, Dalits, farmers and unemployed youth and the neglect of quota for the backward and Dalits,” Mr Chauhan wrote in his resignation letter, using almost the same language as Swami Prasad Maurya.

“If any family member strays, it is very sad. I can only appeal to the respected leaders who are going, please don’t get on a sinking ship or it will be their loss. Big brother Dara Singh, please reconsider your decision,” Keshav Maurya wrote.

He had made a similar appeal to Swami Prasad Maurya, who resigned yesterday, setting off a nosebleed in the BJP of OBC or backward caste leaders.

The exits are blowing a hole in the BJP’s OBC leadership before an election where the party’s main challenger is Akhilesh Yadav and backward votes are critical.

Mr Chauhan is likely following the BSP-BJP-Samajwadi Party circuit like five others before him.

“My move has caused a bhuchaal (earthquake) in the BJP,” Mr Maurya boasted in an interview to NDTV, claiming that more ministers and MLAs would leave the party along with him.

Shortly after Mr Maurya posted his resignation letter on Twitter, Samajwadi Party leader Akhilesh Yadav tweeted a photo with him, welcoming him and his supporters to his party.

The BJP leadership, stunned by the exodus of strategically important OBC (Other Backward Class) leaders, has tasked Keshav Prasad Maurya with persuading the rebels to change their mind.

Mr Maurya was one of the BJP’s most prominent backward leaders and was key to the party’s strategy of reeling in non-Yadav OBC voters in the UP election, as a counter to Akhilesh Yadav.

Last year, these leaders were part of a group that had revolted against Yogi Adityanath and had complained to the leadership about his working style and his “arrogance”.

Though the BJP despatched a central team to take feedback and suggest changes, nothing came of the efforts and the party opted for status quo.