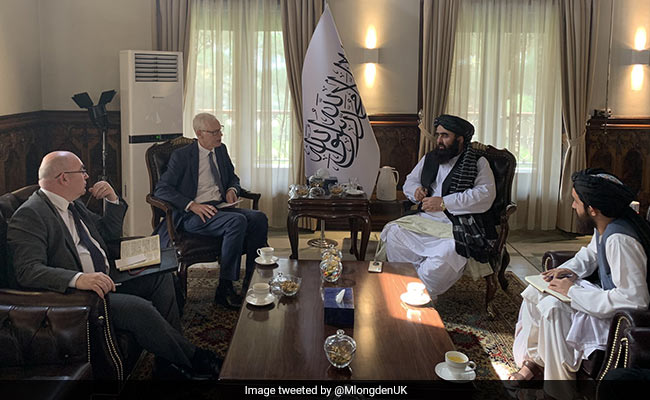 A top British envoy held talks with senior Taliban officials in Kabul on Tuesday — the first since foreign forces evacuated from Afghanistan — as the country’s new masters seek a path out of international isolation.

The hardline Islamist movement declared a new regime after overrunning the capital in August and ousting the US-backed government.

But after 20 years of war the aid-reliant country faces economic collapse, with major donors pausing funding and no emergency support in place.

The new rulers have been courting hesitant foreign powers in a bid to restart cash flows to the country, where civil servants and healthcare workers have gone months without salaries.

The two sides discussed how Britain can help Afghanistan battle terrorism and a deepening humanitarian crisis — and provide safe passage for those who want to leave the country, a UK government spokesperson said.

“They also raised the treatment of minorities and the rights of women and girls,” the spokesperson added, saying Gass was joined by Martin Longden, charge d’affaires at the now evacuated UK mission to Afghanistan.

The Taliban, notorious for their brutal and oppressive rule from 1996 to 2001, have faced a backlash after effectively excluding women and girls from education and work across the country.

Western governments have warned that the Taliban must form an “inclusive” government and respect women’s rights if they are to be formally recognised.

Neighbouring Pakistan however has been pushing for the international community to engage with the new rulers and help stabilise a country threatened by famine.

The Taliban have made some gestures towards international respectability, while insisting on their right to return to a government based on their hardline interpretation of Islamic law.

On Tuesday girls returned to some secondary schools in a northern province, Taliban officials and teachers said, despite them remaining barred from classrooms in much of the country.

A video posted by the group’s spokesman Suhail Shaheen showed dozens of schoolgirls in black, some wearing white head scarves and others with black face veils, sat in chairs waving Taliban flags.

But education ministry official Mohammad Abid said there had been no policy change from the interim central government, telling AFP on Tuesday: “High schools still remain closed for girls.”

The Taliban, which have permitted girls to attend primary school, have said girls will return to secondary schools once their security and strict gender segregation under sharia law can be ensured.

Several teachers and a head teacher in Kunduz city, the provincial capital, told AFP that girls at high schools in some districts had gone back to classes.

The Taliban also announced at a stage-managed rally that some women civil servants have been called back to work, in signs the Islamists may be trying to soften their public image after 50 days in power.

Interior ministry spokesman Qari Sayed Khosti told AFP that all staff of the passport department “including female employees” were asked to return to their offices.

Meanwhile, a report from Amnesty International on Tuesday warned that the Taliban’s brutal abuses and repression of minorities during their first stint in power could be repeated.

The rights group said it had determined that Taliban forces killed 13 ethnic Hazara in the central Daykundi province on August 30, in what it said “appear to be war crimes”.

Eleven of those killed were former government soldiers, and Amnesty said witnesses saw nine of them executed after they surrendered.

Two civilians, including a 17-year-old girl, were also killed in the crossfire.

“These cold-blooded executions are further proof that the Taliban are committing the same horrific abuses they were notorious for during their previous rule of Afghanistan,” Amnesty chief Agnes Callamard said in a statement.