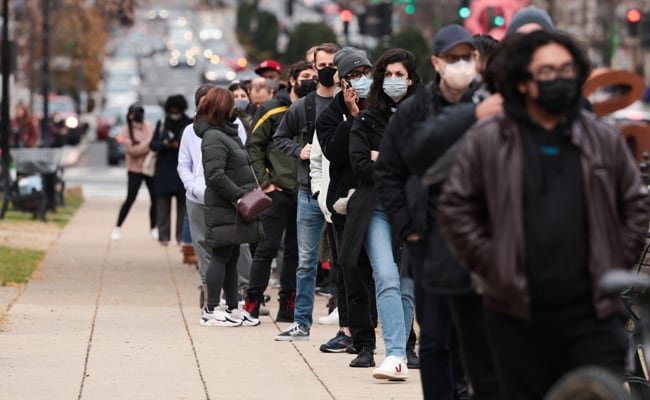 The United States has reached its highest-ever average of new Covid cases, according to data from Johns Hopkins University, as the Omicron variant spread at a blistering pace.

The moving seven-day average of new cases was 265,427 as of Tuesday, surpassing the previous peak of 251,989 set in mid-January 2021, a tracker maintained by the university showed.

Ahead of Johns Hopkins releasing the data, Harvard epidemiologist and immunologist Michael Mina tweeted the count was likely the “tip of the iceberg” with the true number of cases likely far higher, because of a shortage of tests and results from home tests not being included.

The heavily-mutated Omicron strain, which according to government modeling accounted for around 59 percent of national US cases in the week ending December 25, is the most transmissible seen to date.

It is frequently able to bypass prior immunity conferred by vaccination and prior infection.

Though the rate of severe outcomes appears to be lower, Omicron is already overwhelming previously stretched hospital systems throughout the country, with health workers leaving in droves because of burnout.

Almost 9,000 patients are being admitted every day, according to data collected by the Centers for Disease Control and Prevention (CDC), still some way short of the peak of 16,500 per day seen in January, though this is a lagging indicator.

Around 1,200 people were dying on average every day on December 23, the day before data collection was disrupted by Christmas holidays.

Experts are hoping the US Omicron wave will be more like a “flash flood” as seen in South Africa, where it was first reported in mid-November but where cases have been receding since more than a week.

The latest milestone comes as the CDC shortened recommended times that people should isolate after a positive test from 10 to five days, so long as they do not have symptoms and continue to wear a mask.

The move was praised by airlines and the hospitality industry, but public health experts criticized the decision to omit a requirement for a negative Covid test — even via rapid antigen, which correlates well with infectiousness.

More than 820,000 Americans have died from the pandemic, making the United States by far the hardest-hit country in the world.