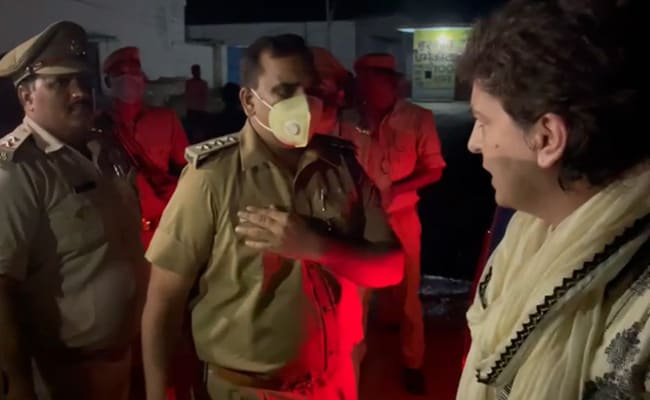 Priyanka Gandhi Vadra is being stopped at Sitapur

Congress leader Priyanka Gandhi Vadra was detained early this morning by the Uttar Pradesh police as she headed to meet the families of four farmers killed in the wake of violence during an anti-farm laws protest in the state the previous day.

The farmers, who had assembled to stop the visit of the Union Minister and Deputy Chief Minister Keshav Prasad Maurya, said the violence in Lakhimpur Kheri district started after the minster’s car mowed down the protesters. Visuals from the area showed arson and vehicles set on fire.

The Congress tweeted a video saying Priyanka Gandhi Vadra is being taken to Sitapur Police line and urged people to gather there.

“I am not important than the people you have killed. The government you are defending. You give me a legal warrant, a legal basis or else I will not move from here and you won’t touch me,” a visibly agitated Congress leader, surrounded by policemen, is heard saying in a video when her convoy is stopped at Sitapur.

She is requested by a policewoman to move to the side.

“Warrant nikalo, order nikalonahi toh main yahan se nahi hil rahi hoon (Produce a warrant or a legal order or else I am not moving out from here) and if you will put me in that car I will charge you with kidnapping. And the charge will not be against the police but you,” She is heard telling the cop.

At this point Congress leader Deepender Hooda, who is standing next to her, questions the policeman as to how could he raise his hand against Priyanka Gandhi Vadra. It is not clear what really happened or if the Congress leader was hit.

“I am going to testify. I have seen it,” says Mr Hooda, before he is pushed back by a cop and moved to a waiting car.

“You can’t speak to a woman but are hitting him,” intervenes Priyanka Gandhi Vadra and stands in between Mr Hooda and the group of policemen. She then asks them to produce a warrant or an order that gives them the power to stop their convoy.

Rahul Gandhi tweeted in support of sister Priyanka Gandhi, underscoring that they will make farmers win.

“Priyanka, I know you won’t back away – they are stunned by your courage. In this non-violent fight for justice, we will make the country’s Annadata win,” Rahul Gandhi tweeted.