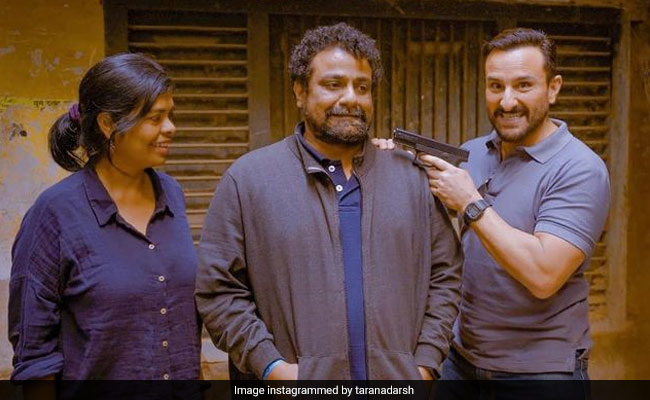 Saif Ali Khan has wrapped up the second schedule of his upcoming film Vikram Vedha. The 19-day schedule was shot in Lucknow. Trade analyst Taran Adarsh has shared this piece of information on Instagram today along with a picture of Saif Ali Khan and directors Pushkar and Gayathri. The movie is set to release on September 30, 2022. Hrithik Roshan and Radhika Apte will be seen in crucial roles. Vikram Vedha is a Hindi remake of the Tamil film of the same name, directed by husband-wife duo Pushkar and Gayathri. The 2017 thriller was headlined by Vijay Sethupathi and R Madhavan.

In the photo shared by Taran Adarsh, a goofy Saif Ali Khan is pointing a gun at Pushkar. Along with the pic, he wrote, “Vikram Vedha: Saif Ali Khan wraps up the second schedule in Lucknow…Co-stars Hrithik Roshan and Radhika Apte will be seen playing pivotal roles.” Vikram Vedha is bankrolled by T Series and Reliance Entertainment in association with Friday Filmworks and YNOT Studios. The Tamil version saw R Madhavan as Vikram, who is a police officer. Vijay Sethupathi played the gangster Vedha.

Meanwhile, Saif Ali Khan was last seen in Bunty Aur Babli 2 opposite Rani Mukerji.  Siddhanth Chaturvedi, Sharvari Wagh and Pankaj Tripathi were also part of the project. The film was a remake of the 2005 hit Bunty Aur Babli.

Apart from Vikram Vedha, Saif Ali Khan is also part of Adipurush, featuring Prabhas, Kriti Sanon and Sunny Singh. The Om Raut directorial will see Saif Ali Khan play the role of “Lankesh”. It is expected to be released in August 2022. The movie is shot in Hindi and Telugu.