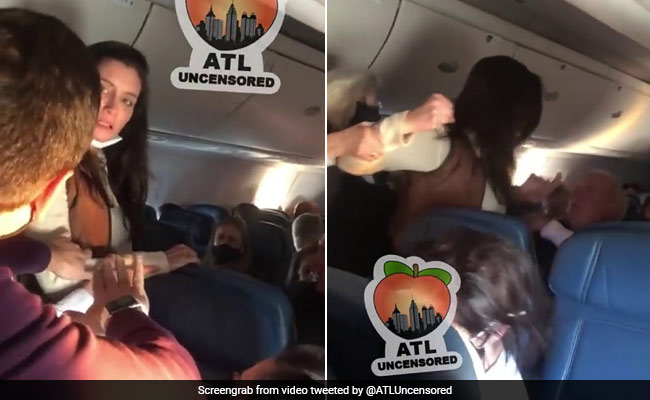 Patricia Cornwall, 51, was filmed attacking a man on a Delta flight.

A woman was arrested by the FBI after she assaulted and spat on another passenger aboard a Delta flight from Tampa to Atlanta. According to the New York Post, the incident occurred when Patricia Cornwall, 51, was walking back to her seat from the bathroom and found the aisle blocked by a beverage cart on December 23. When a crew member requested her to take an open seat until the beverage cart could be moved, Ms Cornwall allegedly said, “Who am I, Rosa Parks?” – invoking the name of the iconic African-American civil rights activist who refused to give up her seat on a bus to a white man in 1955.

At this, a man seated nearby told Ms Cornwall: “You’re not Black, this isn’t Alabama, and this isn’t a bus.”

That led to a confrontation which escalated until Ms Cornwall punched and spat on the other man. The attack was recorded by a co-passenger and has gone viral online.

In the video of the incident, which has been viewed more than 9 million times on Twitter, Ms Cornwall was heard asking the man to put on his mask. Her own face mask, meanwhile, was pulled down to her chin.

An enraged Ms Cornwall was then seen slapping the man even as crew tried to restrain her. The confrontation continued until she was dragged away.

Ms Cornwall was met by the police and then taken into FBI custody when the flight landed in Atlanta.

“Based on the statements gathered and visible evidence, officers detained Ms. Cornwall and contacted the on-call FBI agent,” police said in a statement obtained by New York Post.

“The officers then relocated with Ms Cornwall to the domestic Atlanta Police precinct where FBI agents responded and took custody of Ms Cornwall,” it added.

Patricia Cornwall appeared in federal court in Atlanta on Monday afternoon, reports CNN. She is accused of “assault by striking, beating, or wounding R.S.M. in the special aircraft jurisdiction of the United States.” If found guilty of the class A misdemeanor, she could face up to one year in prison and a fine of up to $1,00,000.