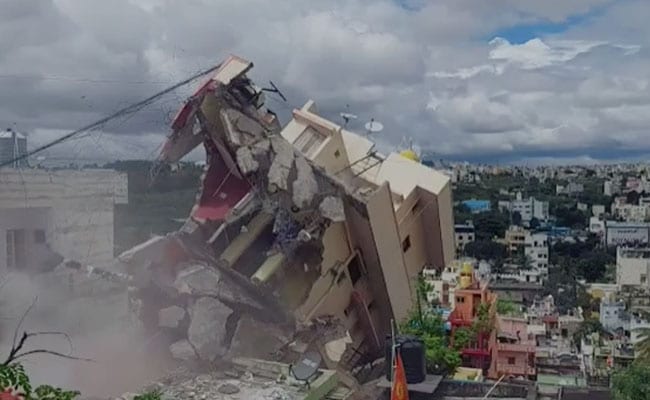 Authorities have demolished another building in Bengaluru after a tilt was reported in the structure by residents late last night. The four-storey building in west Bengaluru’s Kamala Nagar was swiflty evacuated.

Fire and emergency service officials were present at the spot. The police, too, were at the site.

“All the people who lived in those houses and those who lived in the surroundings were shifted elsewhere. Accommodation and food arrangements were made for such families,” the Bruhat Bengaluru Mahanagara Palike said in a statement.

Officials have pinned the blame on heavy rain and poor foundation for the tilt in the building.

It was one among the 26 buildings listed by the municipal corporation that was to be demolished.

Out of eight families in the building, two vacated it after it was listed to be demolished. Six families were evacuated yesterday after the tilt was noticed.

Bengaluru on Monday witnessed heavy rainfall, causing a flood-like situation across the city. Heavy rain was witnessed in the city on Sunday as well which had brought down trees and flooded homes, while several roads were water logged in parts of the city.

At the Bengaluru airport yesterday, some passengers were seen hitching a ride on a tractor to arrive at the terminal gates. The roads outside the Kempegowda International Airport (KIAL) were seen inundated and several passengers stranded on the sidewalks.

Last Thursday,  a three-storey building collapsed in the city’s Kasturi Nagar, making it the fourth such incident in a fortnight.

Soon after Bengaluru’s municipal commissioner Gaurav Gupta had asked the zonal commissioners to set up committees to survey and identify buildings that could be dangerous and those that have been built by violating the law.

On September 27, nearly 50 people escaped unhurt when a 70-year-old building crumbled to the ground in Bengaluru’s Lakkasandra area.