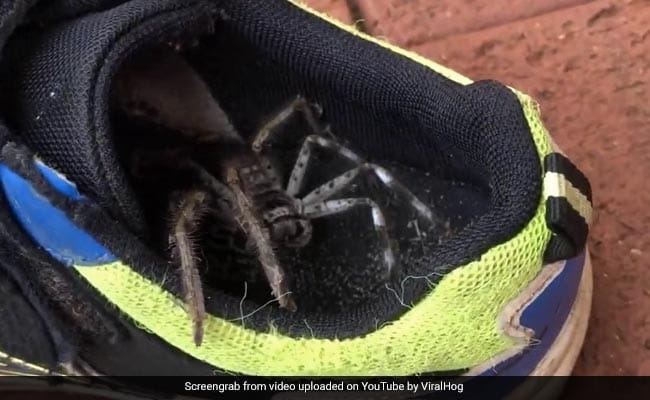 A family in Western Australia got the shock of their lives a few days ago when a large huntsman spider climbed out of their child’s school sneaker. The incident occurred on December 21. In a 29-second video uploaded on the YouTube channel ViralHog, we can see the spider climbing out of the shoe, revealing its large size, even as squeals could be heard in the background. The family that resides in a small farming town in the Wheatbelt region of Western Australia is used to “creepy crawlies”. However, this big spider emerging from the shoe gave them “quite a scare”.

“We live in a tiny little farming town in the Wheatbelt region of Western Australia. Creepy crawlies are always coming in from the bush. We stumbled across this huge huntsman spider in our shed and it gave quite a scare,” mum Ruth Tinley said.

The family also stated in the caption that they kept their shoes “outside and the kids all know to check their shoes before putting them on”.

The video has been viewed over 5,000 times on YouTube. Many people have even commented on it. The comments ranged from amused to concerned.

While a viewer felt that they were “lucky to live in Canada”, another felt this can happen “only in Australia”.

“Spider and toads send shockwaves down my spine,” read one of the comments.

There were also those who commented on the importance of checking shoes before putting them on.

One user felt that “this is what happens when you leave your shoes outside”.

Another commented that the shoe’s opening was “as good a cave as any”.

One other user’s comment showed how spooked they were by the video. “Burn the shoe, it laid eggs in there,” wrote the user.

According to Australian Museum, huntsman spiders have lengthy legs and are usually grey to brown in colour. Many huntsman spiders have “flattened bodies” that allow them to survive in narrow spaces. Their legs have the joints twisted such that they “spread out forwards and laterally in crab-like fashion”. These spiders are can enter houses or cars, and can also be found hiding behind sun visors or the dashboard. In terms of danger to humans, “a cold pack may relieve local pain”.