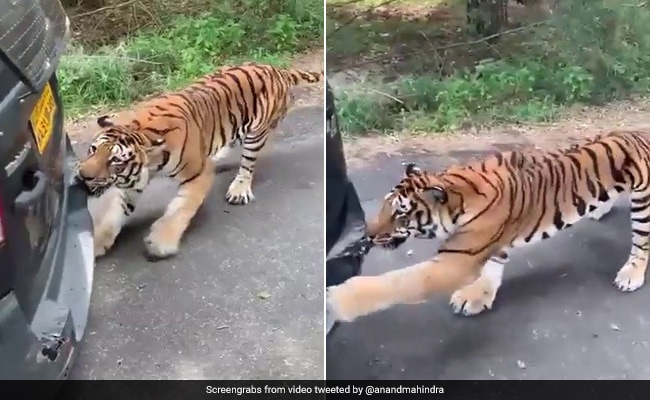 A tiger pulls a safari vehicle at Bannerghatta National Park

A hair-raising video from Karnataka’s Bannerghatta National Park shows exactly how powerful a tiger is. In the clip, shared by industrialist Anand Mahindra on Twitter, a tiger was seen pulling an SUV full of tourists using just its bite force. “Oh my God he is pulling the whole car,” tourists in another vehicle were heard exclaiming as they filmed the unusual scene.

The video shows the big cat repeatedly biting down on the rear bumper of the Mahindra Xylo SUV. At one point, it managed to get a grip on the bumper and pull the car backwards. The whole scene was filmed by tourists in another car standing on the road. “Oh he’s pulling it back,” one of them was heard saying shortly before the camera panned to show the car being pulled was full of tourists.

In the comments section, a man named Yash Shah identified himself as one of the tourists in the car being pulled by the tiger. He said the incident occurred in November last year after the Xylo broke down at Bannerghatta National Park near Bengaluru.

Sharing the clip, Mr Mahindra said it was spreading like wildlife on messaging app Signal. “Well, that car is a Xylo, so I guess I’m not surprised he’s chewing on it. He probably shares my view that Mahindra cars are Deeeliciousss,” wrote the chairman of Mahindra Group.

Going around #Signal like wildfire. Apparently on the Ooty to Mysore Road near Theppakadu. Well, that car is a Xylo, so I guess I’m not surprised he’s chewing on it. He probably shares my view that Mahindra cars are Deeeliciousss. ???? pic.twitter.com/A2w7162oVU

The video has clocked in over 4 lakh views since being shared yesterday. In the comments section, many marvelled at the strength of the tiger.

Power of teeth is so much that he is pulling the car backward . pepsodent or closeup toothpaste?

It seems that the Tiger is pulling back the Xylo with his teeth. Does it merit now to rate the capacity of Xylo in “Tiger power” rather than “Horse power”?

A tiger pulling a Xylo on park mode back easily. Not a great safety advertisement, sir!

Yash Shah, who was inside the Xylo, also shared a video of the tiger from another angle

Sir! @anandmahindra. I am delighted seeing this video shared by you. This incident happened in Bannerghatta National Park on 22Nov2020. Xylo broke down and wasn’t starting. White tshirt guy in the car thats me with my family. https://t.co/Ac8hqyC8vJ

Tigers are the largest members of the cat family with an impressive bite force – they can deliver more than a thousand pounds-per-square-inch of pressure. According to Field and Stream, that is twice as much bite force of a lion.