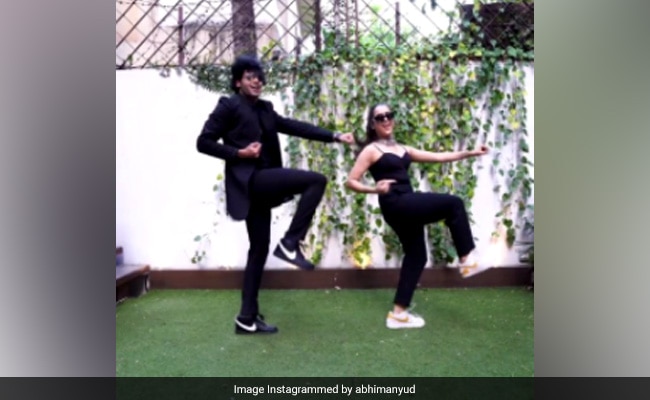 Sanya and Abhimanyu in a still from the video. (courtesy sanyamalhotra)

Just like the rest of the country, even Sanya Malhotra and Abhimanyu Dassani are fans of superstar Rajnikanth. Like their characters from the new Netflix film, Meenakshi Sundareshwar,  the actors cannot help but groove when a song of (or about) the legendary icon is played. This time around, Sanya Malhotra and Abhimanyu Dassani celebrated Thalaiva – as Rajnikanth is known among fans — by dancing to a song about the actor from their film. Dressed in all-black outfits, the two actors pulled off some amazing moves while recreating a few trademark Rajnikanth moves like flipping the towel and rocking the sunglasses.

Sharing the video, Abhimanyu Dassani wrote, “Dose of Meenakshi Sundareshwar for the weekend!” The unbridled love that fans feel for Rajnikanth is a pivotal plot point in the rom-com that focuses on a couple thrown into a long-distance relationship soon after their wedding.

Before this, we also saw Sanya Malhotra and Abhimanyu Dassani groove to another peppy number from the film titled Vaada Machaney. Watch the video here:

Abhimanyu Dassani’s mother, actress Bhagyashree also joined the fun by performing to another track from the film named Tittar Bittar. And the Maine Pyaar Kiya actress was not alone. She was also joined by members of her household in the sweet video shared on Instagram. Sharing the clip, Bhagyashree wrote, “Meenakshi Sundareshwar. Has got everyone grooving to Tittar Bittar. Let love bloom.” Reacting to the clip, Abhimanyu Dassani wrote, “Mom,” with a heart emoji.

Bhagyashree seemed pleased with the reception her son’s film received and even posed with Abhimanyu Dassani in a photo on Diwali to thank the audience. She wrote, “New year, new beginnings! My son’s first Netflix film Meenakshi Sundareshwar released today. Thank you all for pouring in so much love. If you haven’t watched it yet, cuddle up with your loved one, get some popcorn and fall in love again. Thank you all for your blessings. Naye saal ki shubhkamanaye.”

Meenakshi Sundareshwar is Abhimanyu Dassani’s second film. He debuted with Mard Ko Dard Nahi Hota in 2018. Sanya Malhotra, meanwhile, is known for her work in films such as Dangal, Shakuntala Devi, Photograph, and Pagglait.