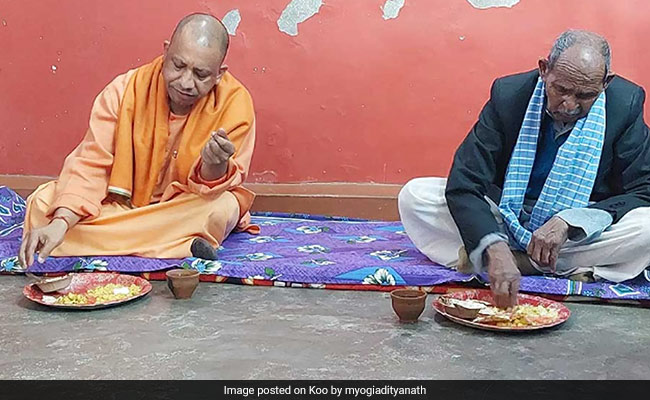 On Friday afternoon, as Akhilesh Yadav was welcoming seven rebel BJP leaders – two ex-ministers and five ex-MLAs who have considerable sway over OBC voters in the state – to his party, Uttar Pradesh Chief Minister Yogi Adityanath was lunching at a Dalit household in Gorakhpur.

The Chief Minister, whose party and government are on the ropes after 10 MLAs (and a 11th from allies Apna Dal) walked out this week less than 30 days before polls, hit back at Mr Yadav, declaring “social exploitation” and not “social justice” was common in UP under Samajwadi Party rule.

The BJP government, on the other hand, the Chief Minister said, was working for the development of every section of society without any discrimination.

His statement is significant in light of the criticism (nearly identical in each case) from the OBC leaders who quit between Tuesday and Thursday – that the Yogi Adityanath administration was “deaf” to the problems of Uttar Pradesh’s backward classes.

“The goal of social harmony is to continue to grow… I had the good fortune of receiving khichdi (and) prasad at Amrit Lal Bhartiji’s house at Jhungia in Gorakhpur today. Thank you very much Bhartiji!” the Chief Minister’s Twitter handle said.

Videos of the lunch showed a sombre Yogi Adityanath sitting cross-legged on a bright blue mat, with Mr Bharti, looking warily around him, seated a few feet to his left.

The furious defence of the ruling BJP’s commitment to social justice comes after the rebel leaders, beginning with ex-minister Swami Prasad Maurya, said inattention to the state’s backward castes and communities had forced them to quit.

Swami Prasad Maurya and another ex-minister, Dharam Singh Saini, both joined the Samajwadi Party today, and were welcomed by Akhilesh Yadav.

“Today the conch shell has sounded for the end of the BJP. By misleading the people of the country and state, the BJP has thrown dust in their eyes and exploited people. Now it has to be eliminated… and Uttar Pradesh has to be freed of exploitation,” Swami Prasad Maurya said after joining.

For Mr Yadav, a former UP Chief Minister who has established himself as the BJP’s main rival in the February-March election, the acquisition of these OBC leaders is a big boost.

In 2017 the BJP’s strategy was to win over the non-Yadav OBC castes given Mr Yadav’s most loyal voters are seen to be Yadavs and Muslims.

This time round, the Samajwadi Party leader’s game-plan is to pull in the non-Yadav OBC leaders.

Last year, another influential OBC face and a former BJP ally, Omprakash Rajbhar and his Suheldev Bharatiya Samaj Party, crossed over to the Samajwadi Party.

With input from ANI